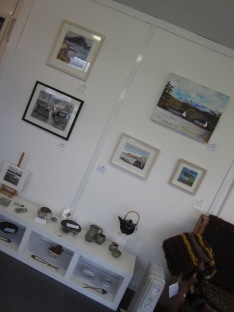 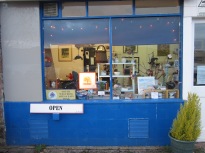 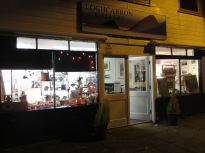 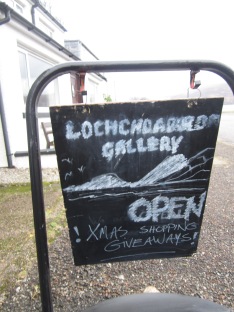 I’ve been at  Lochcarron Gallery again today. It’s quiet compared to the Summer months, but that gives me time to catch up on paperwork, website admin and reveiwing some of the sketches that I’ve done over the past few months.

It’s been a real learning experience, working alongside two artists, whom I admire greatly, Mairi Young and Aileen Grant

Our aim this year was to showcase contemporary arts and crafts in a bright and airy gallery space. We sourced a number of artists and makers locally and from all over Scotland and have included them in the gallery.

We also started selling books, thanks to making the aquaintance of author Graeme MacRae Burnet Graeme’s local connections led him to pop into the gallery, early last year and we took a couple of copies of “His Bloody Project” just to see how it would do. The rest, as they say, is History and it was great to meet Graeme and hear him speak, as we organised a talk here in the gallery as part of last year’s open studio project.

It’s been great to be able to be involved in the classes that we have run from the gallery, even if I haven’t been able to attend them all. I’ve still been inspired to see the work produced by the students who did take part in workshops run by, Jonathan Shearer,  Sarah Longley  Steven Proudfoot and Aileen Grant

The gallery has more workshops planned, over the next few months and I might even manage to run one myself!

We’ve been really lucky in our first year, with lots of support from locals and visitors, including those who are visiting the Highlands for the first time, thanks to the North Coast 500 project, which has attracted much attention and enthusiasm.

It’s been really great too, to have my work showcased alongside some wonderful artists and makers and that’s encouraged me to try new things

One of the aims of the gallery has been to have several exhibitions throughout the year, with different featured artists each time. The programme for 2017 is being drawn up at the moment, but we already have some very exiting new artists joining us this year as well as many of our favourites from last year.

Our first new exhibition will be before Easter, but in the meantime we have a great selection of work, including new pieces by me and Aileen, alongside Mairi’s glorious knits and makes.

This site uses Akismet to reduce spam. Learn how your comment data is processed.