So the block seems to be over, which is just as well as I have several deadlines coming up in the next few weeks. I’m not sure what finally worked for me, but I think going back to basics helped.

I mentioned that I had been following Roisin O’Farrell’s blog and her words of wisdom have certainly helped, but so did watching several other artists on You Tube. There is so much support online now, much more than when I first went back to painting again five years ago.

It was Roisin that got me started though. One of the things that she suggests is ‘learn your craft’ as an artist. So I lined up my paintings, ones that I had done a few months ago and the ones that I couldn’t seem to connect with now and tried to work out what I thought wasn’t working. I’m quite an intuative artist and I think that some of my paintings were working quite well, like the one below, which is a painting I did of Loch Ewe, back in the Spring 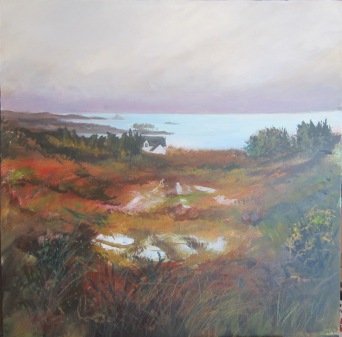 I was quite pleased with this one, but other work just seemed flat, colourless and lacking depth. I’ve had a look to see if I had any images of that work, but I don’t seem to have kept any. Anyway, I decided that maybe I should go back to basics. So I started with atmospheric perspective as that seemed to be working quite well in some of my work from the Spring, but not so much in others.

Atmospheric perspective is when an artist uses colour to simulate changes effected by the atmosphere on the colours of things seen in the distance of a painting. I decided that I was using too much colour and too much detail in background of the painting that I was working on. So I reworked it. I simplified my pallette and kept the stronger ‘saturated’ colours and detail for the foreground, and made the colours in the background more muted. This helped bring out the island, so that it was clearly defined – something that hadn’t been working before as the island and the background had been too close in tone.

I also added stronger, more saturated colour in the foreground and included more details on the boats and in the seaweed and the ripples on the water – though I’m not sure how clearly that can be seen in the photograph

The finished painting is below:

I finished this painting last week and since then I have been working on another piece, also focussing on atmospheric perspective, foreground details and varying levels of saturation.

This piece was only half-finished, but I felt that the background was dominating the painting too much, luckily I did manage to find a photo of that stage of the painting, which I’ve included below. This is a view of Sand Beach in Applecross.

As you can see in the top painting, the island in the background is dominating the painting and there isn’t really and depth to the scene. I changed that by reducing the size of the island and muting or desaturating the colour. I’ve also made other changes, altering the persective of the water in the foreground so that it (hopefully) leads the viewer’s gaze into the painting, I’ve also added detail and stronger more saturated colour to the foreground and included a couple (and their dog) enjoying the view 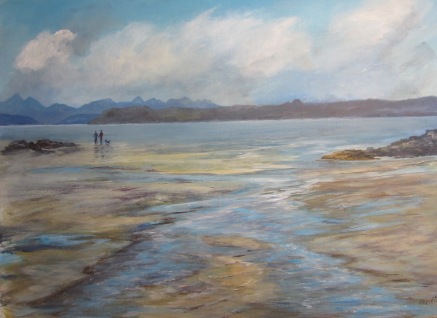 I think that I’ve learned or maybe relearned quite a lot in these two paintings, certainly I have food for thought and something to build on in my next few pieces of work.

Something else that Roisin mentioned, was that the more paintings you produce as an artist the less you worry about each one. That really resonated with me, because I felt as if there was so much riding on each piece being prefect, but, her comments helped remind me that I’ll never achieve perfection as an artist, it’s not possible, I can only strive to produce something that I’m happy enough with and then take what I’ve learned from my latest painting and try to apply that in my next.

Meanwhile, these two paintings will be on display at Lochcarron Gallery for the next few weeks and I have more work to do for an exhibition in Gairloch next week – more about that in a day or two.

This site uses Akismet to reduce spam. Learn how your comment data is processed.